It’s cold outside. I just made some tea and turned up the heating. It’s a lazy Sunday. No plans to go out today, so I decided to just stay in my jammies. Perfect moment to write a blog again.

We’re busy behind the scenes… Last week I was thinking back about the past few months and realised how busy we’ve been since the start of September… The release of ‘Headstrong’ and the tour of The Netherlands kept us very busy. There’s no time to take it easy though… Robb and the band had a couple of gigs in the past few weeks and Robb will release another single before Christmas. At the moment we’re preparing things for the release. Next week a video shoot will take place. Robb is seeking volunteers for this! If you’re living somewhere close to Lisburn and up for being involved in this video and available on Sunday the 29th of November, please read the message below and get in touch!

By now the trees lost their leafs, the days are getting shorter and we’re spending more time inside the house. I don’t like the short days…it always makes me long for spring, summer…sunshine and warmth. Though what’s nice is that during the winter we’re spending more time together. Playing games with the children, cuddle up on the couch, watch a movie, bake cake or cookies…things we don’t do as much during summer.

Time… is it your worst enemy, or is it your best friend? Time is going fast and it’s easy to forget how precious time is, because once it’s gone, you can’t get it back. Time seems to becoming more and more precious as we get older. A second, a minute, an hour, a day, a month, a year….time…it’s bringing countless options, possibilities, chances…decisions…
Time…it comes and goes, slowly or fast. Time is a second or a year, time is now or never. Time heals,  teaches, brings hope, but also fear. Times can be confusing, but time also makes things clear. Time brings lots of joyful moments. Time is right here, right now… It’s good to be aware of how you spend it…do what you love, with the people you love. Spend time on things that make you happy and feel good, live in the moment, because tomorrow today will be a memory. Let every day be a good memory! Don’t worry if things aren’t going the way you hoped for…learn from mistakes and think: “We’ll get it right next time”…which brings me to a song…the song I want to end this blog with…
‘Next Time’, a new song Robb and the band played live for the first time during the tour in The Netherlands.

Robb made a video of the NL tour footage along with the live recordings of the song. The song was recorded at Live uit Lloyd on RTV Rijnmond in Rotterdam.

It’s been a long time since I wrote my last blog… Two months have passed… Often I thought about writing a blog, but I was too busy with other things… And if there was time and I sat down to write, I couldn’t get a blog written. But…here I am… It’s Friday night, weekend just started and I’m making time to write again.

Earlier I was reading the last blogs I wrote and realised how much I didn’t share on the blog yet… So much has happened in the passed two months! Robb has released the single ‘Headstrong’ along with a music video. Just in case you’ve missed it… Watch! The animals kept Robb busy for months…the result is well worth a watch!

After their escape from the zoo no one heard from the animals again until the day ‘Headstrong’ was released… The animals were very excited about the release! Look at what happened on the morning of the release day:

I’m not sure how the animals are doing now, but as far as we know they’re still free… I think that at some point they will show up again…

Another thing happening was the tour of The Netherlands… For months we’ve been preparing things and closer to the tour I realised that I actually had forgotten how much work it is… Sending out press releases, contacting venues to check up on everything, getting merchandise sorted, flyers, tour posters, make a comprehensive tour planning, check up on the accommodation, get groceries, pick up instruments and amps and there’s so much more to do just before a tour.
But…we managed to do it and all the work was so much worth it…

What an amazing week it was. We traveled from the north of the country to the south and back to do gigs, radio shows and a TV show. A lot of people came to the gigs and it was good seeing people enjoy the music so much. Robb and the band performed at great venues and we’ve met a lot of people.

Below are a couple of links to radio shows. You can listen back to the shows online.
Live uit Lloyd, RTV Rijnmond:
http://www.rijnmond.nl/programmas/live-uit-lloyd/berichten/27-10-2015/robb-murphy-gb-live-uit-lloyd

It’s hard to fit everything into one picture but the picture below sums up what we’ve been doing during the tour.

It’s been a very tiring but really great week. Many people were involved. The hospitality and kindness of people was really great to experience and we had a lot of fun. The weather was great during the whole week. There wasn’t much time for sight seeing, but we did get to enjoy great views while traveling and had time to visit the Euromast in Rotterdam to experience amazing views from 180 meters above ground… Below some of my favorite pictures of the views we got to see. 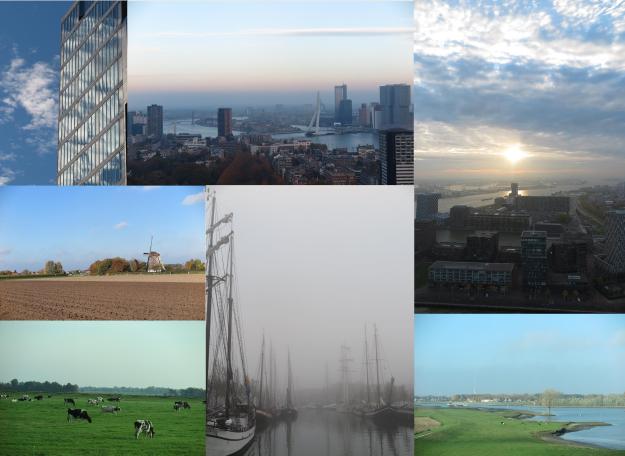 Last Monday the tour ended. Robb and the band flew back to Northern Ireland, taking great memories back home with them. Back to ‘normal’ life again… But for now I will probably be looking at all the pictures we took to remember the good times we had…and to hold on to the good feelings the tour brought…

A song to end this blog with…actually a couple of songs.
Last week Robb and the band performed at Noardewyn Live, a Dutch TV show on Omrop Frylân.
Watch and enjoy!