Kevin Carlisle, David Bennington and Rick McKee all have been questioned and introduced. Many people have been reading the blogs, but if you haven’t read it yet, go check them out…there are some interesting facts to find about the band behind Robb Murphy!

Next up is Alan Ladd, a.k.a. Kid-Al, another multi-instrumentalist in Robb Murphy’s band. Al plays keyboards/piano, strings and with gigs he sometimes plays bass as well. Al is also the man who wrote the strings for the album Sleep Tonight played by The Ulster String Quartet.
Al’s wife, Louise, is also very musical. Louise has a really beautiful voice and you can hear her backing vocals on multiple songs from the album Sleep Tonight. A very musical family!!

Besides being a very talented musician, there are more reasons why Al is such a valuable member of Robb Murphy’s band… Al is good company and he’s good with left-overs.
Left-overs…this requires an explanation…When Al is around you don’t have to worry about wasting food. If you can’t finish dinner/lunch, just pass it on to Al and he’ll eat it. Food magically disappears when Al is around! 😉
While I was going through photos to use for this blog I saw something I forgot about…something about poo… Another interesting fact…Al ended up wit 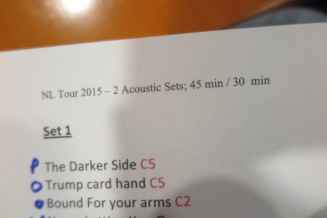 This happened during one of the tours of The Netherlands. Band members often write down some notes for themselves on set lists and while making notes Al suddenly started laughing, saying that he had poo on his set list. This is what happens when silliness takes over from tiredness during tours…and believe me…that happens a lot!

To get to know Al a bit better, he also was sent a list of questions. Here’s what he said:

Tell me a little about yourself in one rambling, run-on sentence 🙂
Born in Yorkshire (England) and now living in Northern Ireland married with two kids, I play keyboards and occasionally strings for Robb Murphy https://www.youtube.com/watch?v=Xkgeg1GFKg4  (you can see both Al and Louise in this video) but I also write software for financial trading platforms by day and I fit in a lot of running around my job, music and family, however, I also love travelling which probably stems from my time as european tour manager for the band Forward Russia https://www.youtube.com/watch?v=EGWxJDFd_cw

How did you meet Robb and where?
We met at Queen’s University Belfast which to be honest is a bit of a blur. I think we met on the first day of our music tech course and soon after started writing songs together, first in a ill-fated four piece guitar group, then as an acoustic duo then finally a three piece band. I still think some of the songs we did back then would fit well with the current tunes as if it’s all come full circle. Of course we’re a lot more mature now…

Describe one perfect day…
Lie in; Ulster fry; Something outdoors in good weather with the kids; A meal out followed by a gig/concert/film/show.

Cats or dogs?
Cat singular. We had two cats that didn’t get along and it was not fun. I’ve no time for dogs at all.

What’s your favourite piece of music at the moment?
Piece of music to me suggests classical but at the moment I don’t have time to sit down and appreciate classical music. So I’d have to say the debut album by London Grammar (“If you wait”). https://www.youtube.com/watch?v=nMEHJPuggHQ

Do you dance?
No apart from on rare occasions I’m made to at wedding receptions.
Sorry Al…maybe you forgot, but you do dance…and…there’s proof of that…click on the link to watch!
Al dancing

If you could be anywhere right now, where would you be and why?
Malta – interesting place and good weather this time of year.

Favourite place in Northern Ireland?
Antrim coast or the Mourne mountains. Since I’m an Antrim man now I’ll go for the coast.

What or who is your biggest influence as an artist?
Radiohead. They have spanned so many different styles there’s probably always a Radiohead song lurking in my mind somewhere. Oh and Brett Domino! https://www.youtube.com/watch?v=5xIUeNJIrak

True or false: “Music is my first love”
False.

Silliest thing you’ve done this past month?
Signed up for an ultra marathon (39 miles) in April.

What is your most valued possession?
My passport. I have to get away from time to time. Music-wise my viola which is 98 years old!

Future plans?
Lots but it’s all a juggling act. I’ve some running challenges this year and I’d like to record some music soon. I also have plans for my own business at some point.

If a penguin wearing a sombrero walked into your room right now, what would you do and why?
Take the hat and wrapper off and eat it right there. I’m a chocoholic.

How many instruments do you play?
In chronological order – violin, viola, piano, bass, acoustic guitar. If it has strings I’d give it a go.

What’s the hardest part about being a musician and what’s the best?
Hardest part is practising. Best bit is seeing the work pay off whether it be live or in the studio.

What constitutes a good live performance in your opinion?
It has to go beyond the sound. You can be playing great faultless music but if it looks like you’re not into it then you’ve lost half the battle. As musicians it’s really difficult to remember that when you’re playing. It’s almost better to make mistakes and smile through it. I remember watching back a video of my first ever band gig and cringing about how static and serious I was.

As a pianist and string player, how do you feel the classics help the modern music scene?
Everything builds on what’s come before so you can relate most things back to classical music even if it’s not obvious.

What does the word “interpretation” mean to you?
Ha – all my parts in Robb’s songs. It might not be exactly what he intended but I always hope it’s as good if not better than what he was thinking. If he laughs when you play something you know it’s good. It took me a long time to realise that!

What surprises you the most?
My kids. Almost every day.

Favourite song from high school?
Toughie again. In early high school I liked Jamiroquai. Hearing ‘Everything in it’s right place’ by Radiohead was a big shift in my taste but I’m going to choose ‘Flying’ by Death in Vegas. The song reminds me of the first gig I went to with schoolmates at Manchester Ritz. It was 9-2 on a school night. Good times. (https://www.youtube.com/watch?v=1jMCQh8aBj0 )

What inspires you?
People achieving things they thought were not possible.

Thanks very much for this Al! 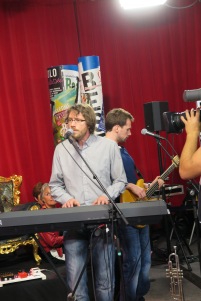 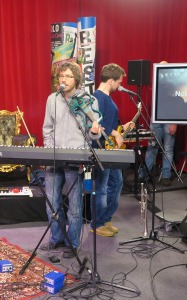 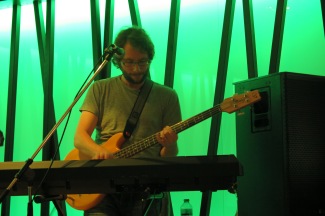 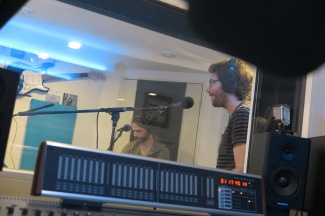 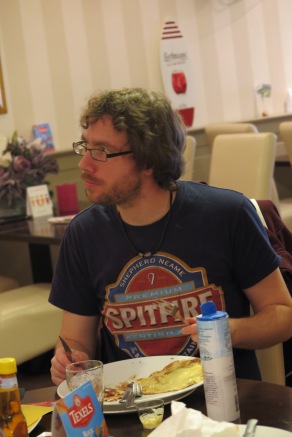 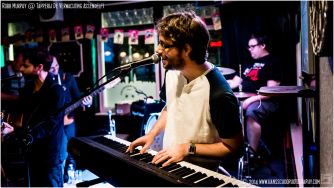