I’ve been writing blogs about everything happening behind the scenes with Robb Murphy for a couple of years now, but while writing the blogs about the band members and introducing them, it came to mind that I never really wrote a blog like that about Robb. It’s about time!

Those of you who’ve been reading my blogs already know a bit about Robb. Next to being a songwriter, creator of music and producer, he’s an outstanding pizza maker, coffee and tea lover, vegan, vinyl collector and he’s always up for silliness….a lot of silliness… Robb likes to challenge himself but, maybe more so, he likes to challenge others…yes I’ve been there 😉 It’s not easy to fool him…but occasionally I manage to do it… Robb always tends to be late and I remember that during one of the tours we had to be at a radio station very early in the morning. I had reasons to believe that we would be late if I told Robb the exact time we had to leave, so I added 30 minutes spare time to that, without Robb knowing… Due to that we arrived at the radio station earlier than expected… That trick never worked again after that btw! And I have to admit…that trick was never needed again, because  we’ve managed to be on time everywhere we had to go ever since.

Sometimes I have to be creative when it comes to making sure that Robb reads what I send him…by adding silly things for example. A while ago I made a to do list and I needed to be sure that Robb would read it. I added ‘practice choreography’ to that list and when he asked me what that was about, I knew that he had read the file 😉
And there’s another example of Robb not always reading everything…it sometimes leads to funny situations like this:

All joking aside…I’ve been working with Robb on the music for 4 ½ years now and it’s been a pleasure. We’ve done so much, had ups and downs, but one thing for sure…things are never boring behind the scenes. There’s always a lot of work to do but we’re always having a lot of fun! Robb, the band and me…we’re all very lucky to have the support from partners, wives, husband and family, because without that we would not be able to do this. We have a lot of plans and are working on some exciting projects, so the work continues….onto the next 4 ½ years!

Time for a Q & A with Robb now…Just like all band members Robb was sent a list of questions too… He complained, saying that I sent him 9 million questions to answer – I think math is a problem here 😉 – but he answered the questions, here’s what he said:

What drives you to write?
Something compels me to write, I do not know what but I need to write music. Things that influence what I write about are just everyday situations, nature, and dreams. I also like trying to put myself in other situations, imagining how it would feel.

Can you remember the first time you wrote a song? Describe it to me.
One of the first songs I wrote was called, “Turtle Dove”. Lyrics were; “I’m a turtle dove, I’m a turtle dove”. Half of this song credit goes to Rick from the band.

What’s your favorite piece of music and why?
So many to choose from but for now I will pick Holocene by Bon Iver. I am usually more about the lyrics of a song but the melody, arrangement and textures created are what never fails to get me. I have been listening to it for years and have not once got bored of it.

What’s the weirdest thing that’s ever happened to you while working on a song?
When I was working on Stars from the Sleep Tonight album I heard a few xylophone notes during the instrumental that really worked, but were not recorded in the mix, I thought I was going mad! What actually had happened was we had guests in another room where I had left a small xylophone, one of them by chance played a few notes at that particular time.  So I had to put it in the song !

Have you had any crazy fan encounters?
Not many, but the first time I was asked to sign something I just assumed the person meant one of the other acts that had played so I went to get them. #Awkward

How would you describe your music?
Lyric focused, emotive, my personal therapy! The music is arranged by whatever instruments and gear I have at hand, and whoever of my musical friends want to be involved.

Best advice ever given?
Don’t try to copy current musical genres, trends will change so just be true to the type of music you want to create, and maybe a future trend will sync with one of your songs.

First song ever sung?
The earliest song I have memories of singing is Nelly The Elephant, The Toy Dolls version.  It was a birthday party favourite !

Secret craving?
Sultanas, in anything

Is there someone you’d secretly love to work with?
Not really, I am a loner. I am most comfortable writing among people I know and am close to. Songwriting for me is a very personal thing so it’s hard to switch it on if I am not relaxed. I love bringing songs to the band that are not fully finished, songs I am not even sure I like, hearing their opinions gives them a burst of new energy.

What do you like to do for fun outside of working on music?
I like traveling, going for a drive, gardening.

You’ve toured the Netherlands quite a few times now, what’s your favourite thing about the Netherlands?
I love the feeling of space in the country, the openness and fresh air. Also the people, always very helpful and welcoming.

Oddest thing that has happened while touring?
It’s all weird, but one that sticks out happened when on tour in The Netherlands.  Returning home late from a gig, my turn to drive, and in front of me was a cyclist riding from side to side on the road. We laughed at this but I just assumed it was someone not realising there was a car behind them. As I slowly approached him he swerved out again to the middle of the road, cycled in a big circle and I will always remember as the car headlights shown on his face his very large grin! He was a happy chappy without a care in the world !

Cats or dogs?
Don’t mind either but cats seem to find me, so I will go with cats

Favourite gig so far?
A gig at Theater ‘t Heerenlogement in Beusichem during last year’s tour. It’s a great old theatre venue, we had a lovely meal with the owners Tineke and Gerard Holst, and a full house! Oh and wine back stage 😉

Where do you see yourself in 5 years?
I would love to have a recording studio and work with other artists to record their music.  Other than that just be alive, healthy and happy!

Best software you’ve used for producing so far?
I use Pro Tools for recording as it’s what I learned in university. But actually before that, though it’s not software, I used a tape dictaphone for recording ideas and I would also record sounds I like when I was out. There will be a lot of weird stuff on there!

Best hardware investment for music production?
When recording Sleep Tonight I got a Focusrite ISA 828 pre amp, a set of 8 preamps that can be used on a bunch of things, I think I will always use it even if I get a larger variety of pre amps!

How many instruments do you play?
A few, but variety of skill levels! Main instrument is the guitar and this feels most natural to me which is why I usually write with it. I play a bit of keys, harmonica, trumpet / trombone (badly out of practice) and the belly slaps.

Favourite  place in Northern Ireland?
Anywhere near the sea! North coast is great. The Mourne Mountains too. Not in the north but a recent favourite is Kellybegs, a small fishing town near Donegal in the North West of Ireland.

What trivial knowledge may save your life one day?
I know how to open a bottle of wine with a shoe

If you could live anywhere on this planet and take everything that you love with you, where would you choose to live and why?
I like it here, but it does lack some sunshine. So I would go somewhere in Tuscany, Italy, a farmhouse just outside Florence. I would take my new wife (not that I have an old one, but recently married) and my guitar. I could also take my macbook and phone, but I can live without them really. Tuscany has a lot of things I love, mostly reliable weather, scenery, art and culture all around. Oh plus coffee, wine and pizza are pretty good there too.

Top 3 songs on your playlist?
Currently on my phone they are:
Bon Iver – Holocene
Traveling Wilburys – Tweeter And The Monkey Man
Edward Sharpe & The Magnetic Zeros – Man On Fire

Favourite song from high school?
A few that always remind me of high school are:
Crash Test Dummies – MMM MMM MMM MMM
Wet Wet Wet  – Love is all around
The Cranberrys – Linger
The Corrs – Runaway
Enigma – Return To Innocence
The Connells – ’74-’75
REM – Daysleeper

Favourite thing about music?
Writing and recording, the buzz when something works.

Least favourite thing about music?
Promoting it, needs to be done but I feel like a broken record.

If you were a vegetable, which one would you be?
A chilli pepper

One perfect day…  what would it include?
Big sleep in, good food, sunshine, sea, maybe a sneaky wine

Thanks very much for this Robb!

If you’ve missed the blogs about band members Kevin, Dave, Rick and Al, click on their names and you can read all about them! 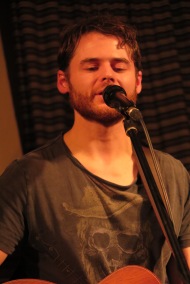 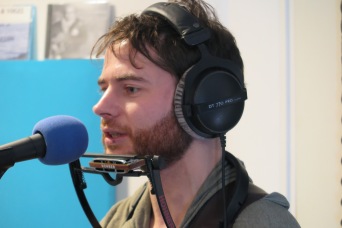